What happens when you combine pumpkin season with Thanksgiving? You get our baked stuffed pumpkin recipe! Scoop out the inside of a pumpkin and stuff it to the brim with bacon, ham, sun-dried tomatoes, mascarpone cheese, and parmesan cheese! Never have a dull Thanksgiving recipe again with this awesome pumpkin recipe. Plus, it’s great even when it’s not Thanksgiving! This pumpkin recipe is great for any event.

Scoop out the inside of a pumpkin and stuff it to the brim with bacon, ham, sun-dried tomatoes, mascarpone cheese, and parmesan cheese!
Print Recipe Pin Recipe
Course Main Course
Cuisine American

We also made a version with meatballs! Instead of cooking ham, bacon, shallots, and sun-dried tomatoes, we added our homemade meatballs from the other day. This is a great option too! We still added the mascarpone and Parmesan. It was great!
Keyword Thanksgiving
Share this 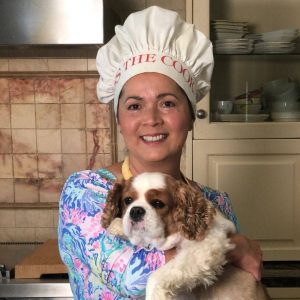 Hi, I'm Magda! I love cooking and making cooking easy for everyone via my YouTube channel. Enjoy all of my delicious recipes.

Cooking terrified me when I moved to the US from Romania. I learned to love cooking and made a YouTue channel & blog to share that with the world! I hope to make cooking easy and fun for you.

Have fun this summer with a super tasty and deceptively

How to make a quick and tasty Italian chicken and

We made a traditional Transylvanian strudel! Follo

We are making our presidential pork loin recipe fo

We love #cooking #steak in our #airfryer 😆 #f

We made a #chickencordonbleu #casserole! What are

New #recipe out now! Find the #chicken and #potato